Commercial and industrial companies can reap many rewards by taking a more hands-on approach in sourcing power. Incorporating solar, wind, and other forms of on-site generation—including combined heat and power schemes—can reduce energy costs, improve reliability, and support sustainability initiatives, among other things.

Before the power grid existed, commercial and industrial (C&I) businesses had to find ways to power their operations internally. That all changed when central power stations became the norm. The development of the modern electric grid allowed C&I companies to focus on their primary businesses and leave power generation to the electric utilities.

However, just as old styles often find their way back into the fashion mainstream, old ways of doing business are starting to find their way back into the C&I world. Today, many non-power companies are finding it beneficial to have on-site generation to support their operations. In some cases, environmental, social, and governance (ESG) initiatives are driving the change, while in others, economic factors or a desire for greater reliability and resiliency are leading companies to install on-site options.

MicroTech, a company that designs and fabricates small metal and plastic components for clients including Volkswagon, Toyota, Boeing, Honeywell, Caterpillar, Bosch, Philips, and NASA, operates a state-of-the-art manufacturing facility in Costa Rica. MicroTech had several reasons for wanting to take greater control of its power system. For example, it was experiencing outages and power surges that were causing trouble with equipment, product losses, and operational inefficiency, and the problems were happening regularly.

“There were a couple of goals we needed to accomplish—economics, backup/resiliency, quality of energy, and the ability to curtail energy were all important,” said Michael McCuen, founder and managing partner of Energías Limpias de Centroamérica (ELCA), a full-service clean-energy developer that focuses on distributed generation, power storage, and power management.

“My company had experience installing other technologies, but in the end, the combination of equipment gave us behind-the-meter capabilities to clean up the quality of energy, provide economic benefits, and provide the backup for their critical loads. The other benefit to MicroTech is they immediately received new client relationships or have increased customer base due to their carbon reductions,” McCuen told POWER.

To facilitate the project, MicroTech signed an Energy-as-a-Service (EaaS) contract with ELCA, which meant MicroTech didn’t have to invest any capital of its own in the project, but it is clearly benefiting from the system, and not just from increased reliability. “Our system has reduced their invoice from the utility by almost 70%,” said McCuen.

Marathon Petroleum Corp. (MPC) had a slightly different motivation than MicroTech for wanting to add on-site power generation to its renewable diesel facility in Dickinson, North Dakota. It wanted to decrease the facility’s carbon emissions profile.

“Lowering the carbon intensity of the renewable fuels we produce at our Dickinson facility helps us to capture additional value in the markets we serve and enhance the overall sustainability of our operations,” Ray Brooks, executive vice president of Refining with MPC, said in a press release.

MPC contracted with One Energy Enterprises to develop, own, and operate five 2.3-MW wind turbines at the Dickinson site (Figure 2). Like MicroTech, MPC was able to avoid investing its own money—One Energy will provide the capital for the project and MPC will pay a fixed price for the wind-generated electricity. One Energy calls its program “Wind for Industry.” 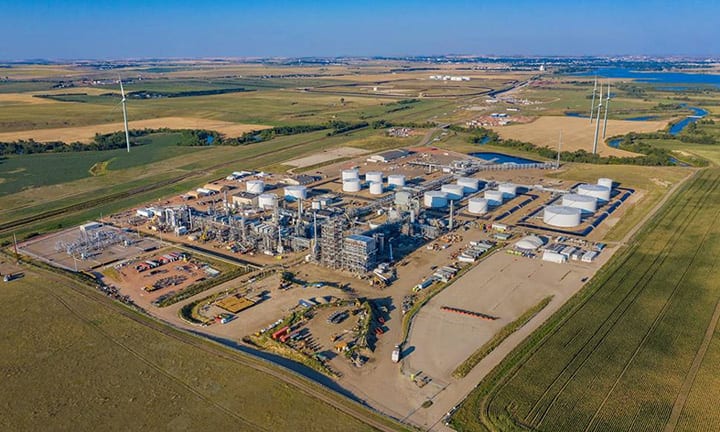 This rendering shows the location of four of the five wind turbines to be installed at Marathon Petroleum Corp.’s (MPC’s) site in Dickinson, North Dakota, which, with a production capacity of about 184 million gallons per year, is the second-largest renewable diesel production facility in the U.S. Courtesy: MPC“With Wind for Industry, we give customers lower rates today, lock those rates in flat for 20 years, significantly lower Tier 2 emissions, and we can do it all without any capital cost to them,” Jereme Kent, CEO of One Energy, told POWER.

“Historically, our C&I customers have been driven by economics—rate certainty, rate control, and cost savings. For these large, often Fortune 500 manufacturers, energy is the only part of their supply chain over which they have little or no control,” Kent said. “In recent years, we’ve seen decarbonization and meeting ESG goals become increasingly important additional factors as well.”

Kent said customers typically want to offset as much of their grid consumption as possible. Therefore, One Energy only uses utility-scale wind turbines—typically with nameplate capacities between 1.5 MW and 2.35 MW—in its projects. In some cases, One Energy will also upgrade outdated high-voltage power systems at customer sites. For that, it offers a solution called ManagedHV, which provides state-of-the-art high-voltage technology and on-site distribution as a service. The system also serves as a platform for future distributed energy resources.

“Although it’s not often talked about, behind-the-meter wind is a profitable and feasible solution for C&I customers. There are incredible barriers to entry for companies looking to provide these services, which is why you don’t often hear about successful on-site C&I wind projects. We have solved the hard problems for customers looking to incorporate on-site generation and utilize the possibilities of on-site wind generation,” Kent said.

Maximizing the Value of Real Estate

“The most important benefit of installing a solar-plus-storage solution for a C&I customer comes down to creating long-term value for their properties and business,” Fischer told POWER.

While systems often incorporate similar technology, there is “never a one-size-fits-all option,” according to Fischer. “Project feasibility always comes down to the site itself—geography, regulations, building type and use, and tenancy,” he said. “Generally, we start with solar as the basic building block—figuring out the best configuration and interconnection—and then we integrate energy storage and EV charging where it creates additional value for our customers.”

There are common solutions that tend to be suitable for certain customer types, however. For example, multi-tenant-occupied office or retail buildings are often a good fit for front-of-the-meter applications (including community solar, if applicable), where all the energy generated on-site is sold back to the grid. A large manufacturer in a single-tenant-occupied building (see sidebar), on the other hand, will frequently benefit from a behind-the-meter solar-plus-storage option, which reduces energy costs, including demand charges, and provides operational resiliency with battery storage. For multi-family or large retail applications, an integrated solution with solar, storage, and EV charging is often best, because it can meet multiple goals for different stakeholders.

Many companies in the C&I sector have a need for process and/or heating steam, so adding or upgrading facilities with new combined heat and power (CHP) systems can make great sense from both financial and sustainability perspectives. Middough Inc., an engineering, architecture, and management services firm with headquarters in Cleveland, Ohio, has been implementing CHP projects since “before there was a name for it,” Pete Kelly, project director for Middough, told POWER. “It’s a sweet spot for us, and we are seeing more and more clients turning to CHP,” he said.

“Middough has some very talented power industry experts on our team to engineer project solutions to help our clients increase energy efficiency or modernize process steam and site power,” Kelly said. “We’ve done projects across agribusiness, emergency power for facilities in the pharma business, a lot of metals and refining, and some governmental muni-type work.”

Middough is currently involved in a CHP project for Tate & Lyle, a global provider of food and beverage ingredients and solutions, at its Lafayette South corn wet milling facility in Lafayette, Indiana. The undertaking, which Tate & Lyle said will cost about $75 million, includes the addition of two new 25-MW Siemens gas turbines coupled with Rentech heat recovery steam generators. The new plant will replace a coal-fired boiler at the site, and is expected to reduce greenhouse gas emissions by about 40% and water use by about 5%. Tate & Lyle installed a similar system at its corn wet mill in Loudon, Tennessee, in 2017.

“This major investment will make our facility more efficient and directly benefit the local community through improved air quality, decreased water use, and less truck traffic,” Travis Montoya, plant manager at Lafayette South, said in a press release. The project is expected to finish this year.

While sustainability factors are often a consideration in new CHP projects, most final investment decisions boil down to economics. “Most of the interest we’re seeing right now is being driven by the spark spread,” Kelly said, that is, the difference between the price received by a generator for electricity produced and the cost of the natural gas needed to produce that electricity.

“Our approach is to perform a feasibility study over three or four weeks with the client to give them an indication whether CHP makes sense. We assess their facilities to understand specific needs of the project and determine whether there’s a good return on investment—depending on their grid connection, depending on proximity to natural gas, and what their specific situation is. After the feasibility stage, we provide a conceptual study to help support their budgeting process through board approvals, help structure the project, and identify risks. This provides a solid foundation for successful projects as we move into design and project completion with our clients,” Kelly said.

Outages caused by storms are troublesome to all businesses, but they can be deadly when hospitals are affected. Saint Peter’s University Hospital in New Brunswick, New Jersey, knew the risks and had emergency generators already in place when Superstorm Sandy struck the Northeast in October 2012. At that time, however, its on-site system was only capable of supplying power to the most critical loads.

In the years that followed, hospital administrators decided a more comprehensive system was warranted. The hospital applied for and was awarded a grant for disaster recovery from the U.S. Department of Housing and Urban Development. Some of the money went toward a CHP system aimed at achieving greater electrical, and heating, ventilation, and air conditioning, energy resiliency.

Real estate is in short supply around Saint Peter’s University Hospital in New Brunswick, New Jersey. That’s why having a combined heat and power system that could fit into a 25 ft. by 50 ft. area was important. Courtesy: Caterpillar

“The system runs continuously to produce electricity and heat year-round,” Scott Yappen, director of business development with Foley Power Systems, told POWER. “It not only supplies energy at a lower cost than local utilities, but it also helps Saint Peter’s avoid hundreds of thousands of dollars in annual peak utility demand charges.” ■

Contact us to have Middough help you deliver your next critical project.